The (In)existence of LGBT Asian Spaces

Amid the COVID-19 pandemic, many have returned home to self-isolate with their loved ones and families to prevent further spread of the virus. Home to many of us is where we feel safe and loved, but to LGBT+ folks, and especially those who are B/I/PoC, the feeling of an accepting and caring home may be but just a dream. The intertwining of gender and sexual orientation-based domestic violence may be a reality to those who are in the intersection of queer-ness and also being part of a racial minority.

While these newfound homes should be celebrated, the queer spaces that are meant to be safe havens for all queer folks continue to make  LGBTQ+ Asians as well as members of the POC community feel alien, unwanted, and disillusioned.

We read each other to filth!

Friday night was a time-honoured ritual. I remember standing at front-and-center with my friends, watching these beautiful drag queens perform their numbers. We held hands and sang in throes to Whitney’s ‘I Will Always Love You.’ The enchanting queens sashayed across the stage with their bejewelled gowns and mermaid-like hair belting their diva-esque numbers.

She turned in our direction, “There seems to be so many Asians tonight! – I’m so glad all of you are able to escape child slave labour back in Asia!” Laughter erupted into throes of hysteria from the audience.

I felt my heart racing and jaw clenching up. Though I let out a meager smile, I felt disappointed, defeated, and repulsed. The joke transported me to points in my life where I was casted out for who I was. My identity was being used as a weapon against me in a place where I’m meant to feel like I belong. In the default home I am cast away and shamed for my sexual orientation, and in my chosen home, for my racial background.

“But it’s just a joke! Learn how to take one! That’s how gay communities thrive! We read each other to filth!” I guess they were right. We were being overly sensitive; after all, being put in the spotlight while highlighting and making fun of something that we have no control over is something to brush over, right?

No Asians, just a preference…

I remember moving out for the first time. I wasn’t new to big cities, but I never had the chance to explore my sexuality living under the same roof as my parents. This would be the start of a new chapter in my life – coming to terms with my gay identity and establishing my family of queer sisters. Boozy brunches, RuPaul screening parties, and scandalous bath house adventures would be my new normal and the LGBT community would be my new home.

At the time, I downloaded Grindr in hopes of fulfilling my gay coming-of-age Hollywood dream. I’ve since learned that the Hollywood dream would never cast an Asian in the leading role.

These are some of the messages that myself and many other Asians receive on the app. However, more recently, they are more along the lines of “Go back to China, that’s where it all began.”

Progress, or is it?

In 2005, Canada legalized same-sex marriage and it names its federal LGBTQ issues advisor, but queer communities continue to sideline people of colour, their struggles, and their experiences. We are no less of a caricature than when we were twenty years ago.

Black and brown bodies created Pride, drag queens, and queer spaces. Marsha P. Johnson, and Crystal LaBeija were at the forefront of creating spaces for queer people and marginalized folks, but why are the current gatekeepers of queer spaces repetitively excluding people of colours? We were the ones who started all of this, but now, why are we reduced to racist jokes and derogatory remarks? To have to pretend that the way we are being mistreated is ok? To accept the breadcrumbs of liberty and equality, because I ‘shouldn’t be too sensitive’ and need to learn ‘how to take a joke’?

These spaces were established so that the LGBTQ community can let their guards down and embrace their true identities. But for some of us, why doesn’t it feel this way?

What can we do as a community?

This month is Asian Heritage Month – a time to celebrate the diversity that defines Canada as we know it today. The culturally-rich community serves as a beacon for what Canadians call home. The LGBTQ+ community should not accept any less.

From casual hangouts and movie screenings to wholesome potlucks and glamorous parties, organizations representing LGBTQ+ Asian-communities across Canada have spearheaded this movement, including Toronto-based ACAS and Ottawa’s up-and-coming DragonFruit Collective as well as Asian-community events, such as Toronto’s New Ho Queen, Rangeela, and Vancouver’s RICECAKE.

However, it shouldn’t be solely the Asian communities responsibility to create space for themselves within queer spaces. Both organizers, participants, and allies of queer Asian spaces hold the responsibility to ensure that queer spaces are truly a place where all LGBTQ+ members can call home.

Dasa and Jason are members of the organizing community for Dragonfruit Collective, based in Ottawa, Canada. Dragonfruit aims to showcase Queer Asian performers, movies, and artists, and as well as to provide an inclusive and safer space for LGBTQ+ folks in the Asian community to mingle and have fun. 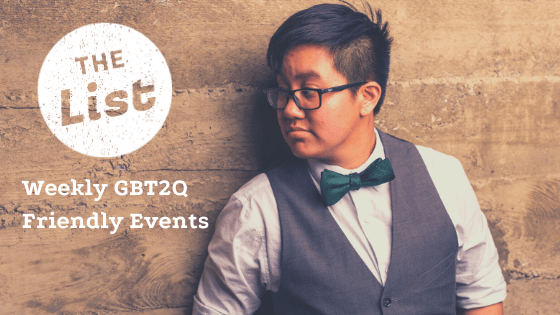